I’m finally home from my 10-day family vacation. All in all, I’d say it was a success… except for the trip home, which included a dead car battery at 2:00 am and someone trying to feed me a Philly cheese steak. 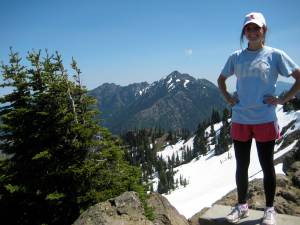 Hiking along Hurricane Ridge in the Olympic Mountains

The Olympic Peninsula turned out to be a great place to visit, although I’m a little disappointed that I didn’t get to see more woodland creatures. On one of our hikes, we were warned numerous times to stay at least 100 yards away from any elk. Apparently the elk were getting annoyed with hikers and had resorted to charging people down. I’ve seen similar behavior in Buster when he was young and spry, and I remember bits and pieces from “The Horse Whisperer,” so I was confident that I’d be able to connect with the angry elk and come to some sort of truce. Unfortunately, we did not come across any elk so I did not get to test my theory.

On another hike, we saw a poster that said, “WATCH OUT! Newts on the trail!” I’m not sure what’s so dangerous about a couple of rogue newts, but I imagine they were running some sort of pickpocketing business to take advantage of unsuspecting tourists.

When we weren’t in the mood to hike, we took day-trips to various towns along the Olympic Peninsula. On our day trip to Port Townsend, my sister and I stumbled upon a local brewery. Since we are both working on the beginnings of modest beer bellies, we wanted to go in for a beer tasting. My mom, trusting our judgment, gave us a couple bucks and sent us in to get a few bottles. Once inside, my sister and I decided it was of the utmost importance to support local businesses, and so we took it upon ourselves to contribute to the “Buy Local” cause by purchasing a gallon of home-brewed beer. It came in handy later that night when my Grandma made us all sit down and watch “An Officer and a Gentleman.”

We spent the last 3 days of our trip in Seattle. I finally got my wildlife fix at the Seattle Aquarium, which is by far one of the best aquariums I’ve ever visited. I have a slight obsession with aquariums/marine life in general, and I seem to have a twisted relationship with sharks. I refuse to swim in murky water or the deep-ends of pools for fear of being attacked, but I can’t tear my eyes away from Shark Week.

When I was little, I wanted to be a marine biologist and work at Sea World. My favorite tune was the Free Willy song by Michael Jackson, aka “Will you be there?” I didn’t understand the words, so I’d walk around singing, “Hold me, holy bologna,” instead of whatever they really say in the chorus. I distinctly remember my mom calling the phone number on the screen at the end of Free Willy, but I’m not sure if we ended up adopting a whale or not. 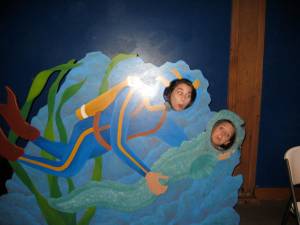 While we were at the Seattle Aquarium, I fantasized about working for Sea World, perhaps doing their advertising or event planning. On my weekends off, I’d saddle up a sea lion or whale and ride until my wetsuit began to chafe. I’ve always loved the sea lions, even though they scare me. When I was little, I leaned too far over the sea lion exhibit at the Louisville zoo. I dropped my pacifier into the water. It was traumatic.

The next thing we did while in Seattle will go down in history as the nerdiest thing I’ve ever done. My family and I were exploring the Seattle Center when we stumbled upon the Science Fiction Hall of Fame museum. My dad loves science fiction. When I was younger, he’d tell me and my sister bedtime stories about black holes, giant space worms and other imaginative alien creatures. It’s a wonder I’m not more screwed up than I already am. My sister and I grew up watching Star Trek episodes with him, so we both have a solid understanding of spaceship protocol and a deeply rooted appreciation for the Syfy channel. That being said, we were all fairly interested in buying tickets to the museum but couldn’t decide if it was worth the steep entrance fee.

Our deliberation came to an abrupt halt when we saw a certain advertisement hanging outside the museum: they had a Battlestar Galactica exhibit. I almost peed my yoga pants when I saw the face of Captain Apollo smiling down at me. He’s my newest crush. If I was still in school, I’d most certainly make a Captain Apollo collage for my binder and/or locker. Since I’m supposed to be an adult now, I settled for making him the desktop background on my Mac.

Nerd Alert! Me with a Battlestar Galactica Viper

Anyways, the exhibit was awesome. I won’t go into great detail as I’m sure only a small portion of the population shares my Battlestar Galactica obsession. But I will say that I now have several photos with the actual spaceships used in filming the series. Jealous? I didn’t think so, but oh well.